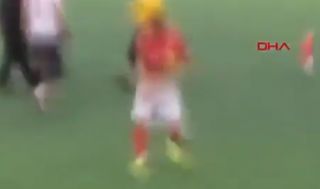 We thought we’d seen everything in football, but now a player has literally flashed his genitals at opposition fans after a game.

This was clearly a bit of a bad-tempered affair in Turkey, as Sanliurfa Genclerbirligi and Siverek Belediyespor played out a 0-0 draw.

We’re not quite sure why things got so animated, but Sanliurfa Genclerbirligi defender Mahmut Onur Toprak can be seen in the video clip above showing his private parts to Siverek Belediyespor supporters.

According to the Sun, the player is now set to be investigated over the incident, though we’re not entirely sure there’s much to be investigated, as the video shows very clearly what he did, aside from some blurring out.

Opinion: Is everyone overlooking the ideal way to get fans back in stadiums and boost local communities?
More Stories Mahmut Onur Toprak