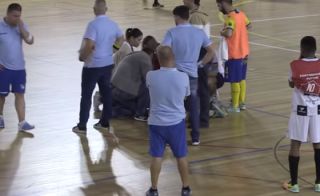 A Portuguese futsal player has died at the age of just 28 after collapsing during a game due to a heart attack.

This shocking footage below shows Fabio Mendes collapsing in the middle of the pitch as medics try desperately to resuscitate him.

Mendes was transferred to hospital but was reportedly pronounced dead before arriving there.

This is truly heartbreaking to watch, with the players and fans around him clearly dismayed by what they’d seen.

The President of the Portuguese Football Federation (FPF), Fernando Gomes, released a statement saying, as quoted by the Sun: “It is with enormous sadness that I received the news of the death of this young man during an FPF futsal match.

“In this moment of deep pain and sadness, I offer in my name and in the name of the FPF my deepest condolences to Central Social Sao Joao, the family in mourning, and all the colleagues and friends who knew Fabio Mendes well.”

While some can take comfort in the fact that Mendes died doing something he loved, it’s also tragic to think of someone losing their life so young and not returning from a kick-about with friends and colleagues.