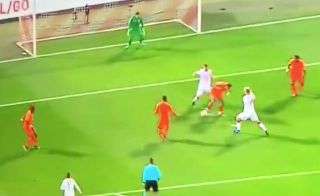 The Netherlands wasted little time putting Belarus to the sword in their Euro 2020 qualifier clash on Thursday night, with Memphis Depay at the heart of it.

The 25-year-old opened the scoring with less than a minute played as he pounced on a poor back-pass to round the goalkeeper and slot the ball into the back of the net.

However, he later turned provider for Liverpool ace Georginio Wijnaldum, as seen in the video below, producing a deft back-heel pass into the path of his teammate, who showed great composure to take his chance first time and beat the goalkeeper.

That gives the Dutch a dominant advantage in their Group C qualifying encounter, as they would have been eager to get off to a positive start and build on the momentum that they’ve enjoyed during the UEFA Nations League.

With Depay in this sort of form, they’ll be confident that they can pick up three points on Thursday and build from there.