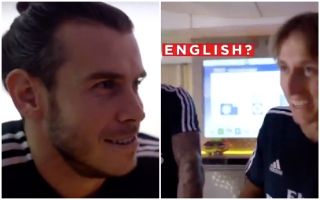 Gareth Bale joined Real Madrid in 2013, but it appears as though the Welshman still hasn’t learnt Spanish properly to converse with his teammates.

The clip below shows the likes of Sergio Ramos, Casemiro, Marcelo and Raphael Varane all asking each other questions as part of a promo.

It eventually comes round to Luka Modric who asks his long-time teammate, dating back to their days at Tottenham, if he wants the question in English.

That immediately gets chuckles from everyone in the group, and as Modric finishes his question in Spanish, Bale responds by conceding that he hasn’t got a clue what he just asked him.

It’s difficult to be fully convinced that this is genuine and not some sort of gag, but ultimately if true, it has to be said that it’s pretty disappointing if Bale still hasn’t mastered Spanish enough to at least have a conversation with his teammates.

It’s been almost six years since he moved to the Spanish capital, and it must surely have hindered him along the way in not being able to fully communicate with his teammates, with the likes of Modric and Varane showing that they’ve picked the language up pretty well.

bale is me during spanish class pic.twitter.com/nfEfeoLO9p