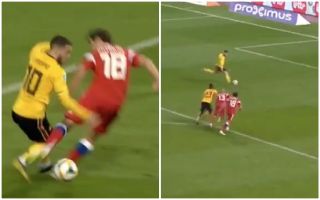 Eden Hazard was on hand to restore Belgium’s lead against Russia in their Euro 2020 qualifying clash after Thibaut Courtois produced a howler.

Youri Tielemans had given Roberto Martinez’s side the lead, but Courtois gifted Russia an equaliser with a horrendous blunder, as seen in the link below.

Fortunately for him though, his former Chelsea teammate Hazard was able to ensure that Belgium went into the half-time interval with a lead, as he not only won a penalty, but dusted himself down and produced a magnificent finish from the spot, as seen in the video below.

It never looked in doubt in truth as soon as he stepped up, as he not only sent the goalkeeper the wrong way, but also found the corner to restore Belgium’s lead.

It came after some quick-footed work in the box to win the penalty, as the 28-year-old continues to be instrumental for club and country.

However, it remains to be seen whether or not it proves to be enough to spare Courtois’ blushes, as he’ll be desperate to see his mistake not cost Belgium three points in their opening qualifying encounter.