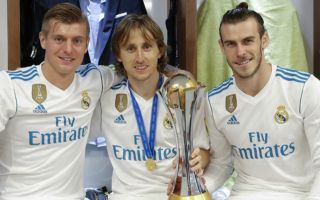 Manchester City are only willing to fork out up to £51M (€60M) to seal a move for Real Madrid ace Toni Kroos, a player who’s desperate to play in the Premier League before he retires.

Given Kevin De Bruyne’s constant injury troubles, combined with the fact that Fernandinho is fast approaching the twilight years of his career, City could do with dipping into the transfer market to bolster their options in midfield.

And it looks like Pep Guardiola’s side have their eye on Real Madrid’s Toni Kroos according to Don Balon, who state that the player is very keen to play in the Premier League before hanging up his boots in a few years time.

Don Balon’s report notes that Real value Kroos at around €80M, however City are only willing to go up to £51M (€60M) for the German international.

If City don’t budge on their valuation of Kroos, it could prove to be a mistake from their point of view, as the German would be a fantastic signing for the club to make.

Kroos has been one of the best midfielders on the planet in the past few years, with the 29-year-old playing a key part in Real’s back-to-back-to-back Champions League triumphs.

Kroos has proven that he’s worth way more than the £51M that City are willing to pay for him, thus it seems surprising that the club are only willing to offer such a little amount.

Might be worth keeping an eye on this one folks, as with a bit of luck, we could very well see this one happening in the near future…