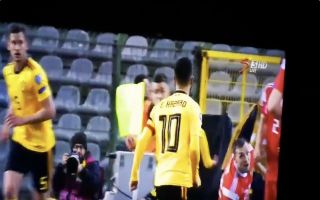 Eden Hazard produced a superb moment of skill for Belgium during a 3-1 European Championship qualifying win against Russia on Thursday.

The Chelsea talisman grabbed himself two goals on the night, one from the penalty spot and another from close range after Michy Batshuayi miscontrolled the ball in the area.

However, Hazard’s most awe-inspiring contribution to the match came in the form of an inventive pass, as he defied gravity with an outrageous flick after receiving an aerial ball.

First three points ??
That is how we wanted to start our #EuropeanQualifiers ??Thx for the support @fanclub1896 ???
See you next Sunday in #Cyprus!

The 28-year-old continues to prove he is one of the world’s greatest players and with him on their side, Belgium have a very real chance of winning Euro 2020.

Check out a clip of Hazard’s skill below, via Twitter.