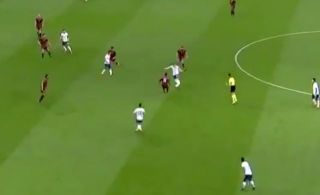 Lionel Messi was back in action for Argentina on Friday night for their international friendly with Venezuela at the Wanda Metropolitano.

It wasn’t going to plan for the Albiceleste in the Spanish capital though, as they fell two goals behind to their opponents before Lautaro Martinez got them back into it in the second half.

SEE MORE: Barcelona ready to listen to £90m-plus offers for superstar amid struggles this season

However, there was some Messi magic on show at least, as seen in the video below, as the Barcelona legend showed incredible close control and skill to dance his way round the Venezuela players with his run starting from the close to the centre-circle.

He still had the composure and awareness to deliver a perfect cross into the box, but unfortunately for him and Argentina, his brilliance wasn’t matched by the finish as they were denied what would have been an equaliser at the time.

Nevertheless, just watching Messi when he’s playing at this level is a joy for football fans, as he makes it look so easy as he shifts through the gears and emerges as a cut above the rest.

? Leo Messi at his best, look at that from the Argentine. That would have been an tremendous assist, Lautaro Martinez so close but a good save from Farinez. #ARGVEN pic.twitter.com/FVXchxINbM