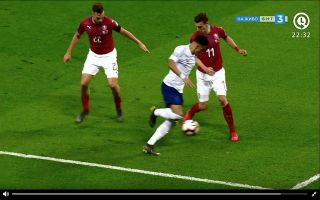 Jadon Sancho pulled off an outrageous double nutmeg during England’s Euro’s qualifier against Czech Republic, the star did this in his first competitive star for the Three Lions.

Sancho nutmegged Czech Republic left-back Filip Novak before being brought down by his teammate, David Pavelka – Sancho got his own back almost immediately by standing up and dishing out a nutmeg to Pavelka.

It’s great to see a player playing with so much confidence, Sancho is one of the best dribblers this country has seen in years.

Check out Sancho’s outrageous skill below:

Sancho did that defender. Look at that sauce pic.twitter.com/SypDxxx95w

? Sancho with the double nutmeg! pic.twitter.com/eO6wZk5P1E

Sancho is seriously one of the biggest talents that England have had in years, the youngster is continuing to shine for Dortmund this season and he’s shown tonight that he was it takes to be a massive star for the Three Lions.