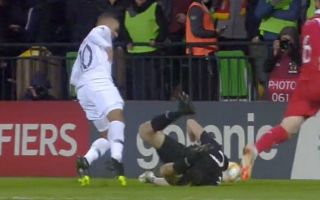 Kylian Mbappe picked up a late booking in France’s 4-1 win over Moldova on Friday night, for what was a poor attempt to try and win a penalty.

However, Mbappe managed to sour his night a little with what appeared to be a poor attempt to trick the referee into awarding a penalty.

As seen in the video below, the 20-year-old is seemingly purposely trying to leave his leg hanging out to initiate contact with the goalkeeper before falling to the ground.

It’s a poorly executed attempt though as the replays showed the gap between the two players and it looks like a genuine attempt to try and win a penalty unfairly.

Fortunately, the referee saw it that way and brandished the yellow card, with Mbappe initially pleading his innocence as he was perhaps trying to stress that he didn’t even appeal.

Nevertheless, the fact that he went down the way in which he did would suggest that he was certainly looking to buy a penalty decision on this occasion…