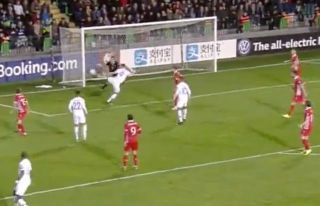 France began slowly against Moldova in their Euro 2020 qualifier on Friday night, but they soon found their rhythm and put the game to bed.

Antoine Griezmann broke the deadlock after 22 minutes after a superb assist from Paul Pogba, and ultimately that opened the floodgates as goals from Raphael Varane and Olivier Giroud soon followed.

Although he continues to struggle to cement his place in the Chelsea line-up, Giroud evidently still has the confidence of Didier Deschamps to play a leading role in his side moving forward.

He repaid that faith with the third goal, as seen in the video below, albeit there was minimal contact from the Chelsea star, but crucial nevertheless as it appears to change the trajectory of the ball slightly en route to the back of the net.

The goal was indeed given to Giroud, who has now scored 34 goals in 88 appearances for the reigning World Champions, which moves him into joint third place on the all-time top goalscorers list for France.

A simple finish for Olivier Giroud, but this goal puts him tied 3rd all time of top scorers for the French National Team. Such an underrated player #MOLFRA pic.twitter.com/46iVPDlMQ2