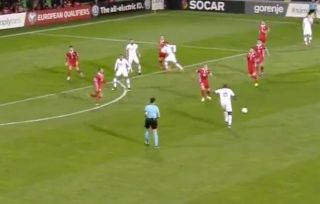 France toiled earlier on against Moldova in their Euro 2020 qualifier on Friday night, but eventually their quality told.

The reigning World Champions will hope to build on their success last year and comfortably come through qualification.

With Paul Pogba and Antoine Griezmann showing this level of quality, it shouldn’t be too difficult for them as they linked up brilliantly in the 22nd minute.

As seen in the video below, it started from Pogba’s brilliant pass to find his teammate, and Griezmann did the rest with a stunning first-time volley to break the deadlock.

However, the vision and execution from the Man Utd midfielder to find him in the box was different class, while Raphael Varane doubled France’s lead just minutes later.

What an assist for the @ManUtd midfielder as Griezmann slams it in from close range! ? pic.twitter.com/rNcQZr74Sh