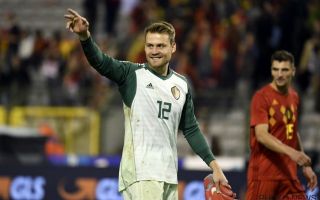 Simon Mignolet took to Instagram yesterday to brutally troll his teammate Thibaut Courtois, the current Real Madrid and former Chelsea stopper made a shocking mistake in Belgium’s clash against Russia on Thursday evening.

Everything has gone downhill for Courtois since he decided to ditch Chelsea last summer for Real Madrid, the lanky stopper has hardly put a foot right since moving to Spain and his poor form looks as though it’s beginning to impact Belgium as well.

Take a look at Courtois’ embarrassing blunder for Belgium below, he really shouldn’t be trying to play the ball out from the back:

Liverpool fans have recently commended Mignolet for the professionalism he’s shown since Alisson’s arrival in the summer, the former Sunderland stopper is a model pro:

Opinion: Simon Mignolet has been a credit to himself and the club ever since losing his spot to Loris Karius halfway through last season. Doesn't moan. Just supports his team-mates. Great pro, good guy ?? pic.twitter.com/iDgiu7Sz8y