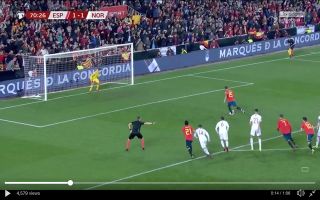 Real Madrid and Spain captain Sergio Ramos scored a lovely ‘panenka’ penalty for Spain in their 2-1 win against Norway this evening, Ramos is all about the style.

Spain were awarded a penalty in the 70th minute of the clash when Chelsea and Atletico Madrid striker Alvaro Morata latched onto a poor pass back from a Norway defender, leaving the goalkeeper with no choice but to bring the forward down.

Ramos was stone cold when he stepped up to the spot and after a little stutter step, the 32-year-old chipped the ball straight down the middle of the goal.

Sergio Ramos with a cheeky panenka from the penalty spot for ?? ? pic.twitter.com/a5gj3zTEZ7

Another Ramos goal, another panenka..pic.twitter.com/xOcd4Nwq7T

Ramos has to go down as the King of the Panenka now surely:

That was Ramos' fifth 'panenka' of the season and the eighth of his career… https://t.co/auKKZflaRh

Real Madrid fans will love to see that Ramos still has that air of confidence about him.