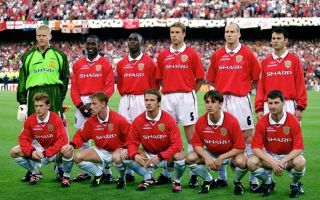 Manchester United legend Ryan Giggs has admitted for the first time that he felt he should have got a go at central midfield in the Champions League final win over Bayern Munich in 1999.

That incredible game, won in stoppage time thanks to two late goals from Teddy Sheringham and Ole Gunnar Solskjaer to turn a 1-0 deficit into a 2-1 lead, sealed a memorable treble for United in what is remembered as one of Sir Alex Ferguson’s greatest achievements in his time at Old Trafford.

With Roy Keane and Paul Scholes unavailable for that big game, it looked like being between Giggs and David Beckham for a central midfield spot alongside Nicky Butt.

In the end, Ferguson went with Beckham, with Giggs playing his usual role out wide, though the Welshman now admits he felt he could have done better than Beckham if he’d been given a role in the middle.

‘There is a bit of me — and I don’t think I have said this before — that felt I should have been playing centre mid,’ Giggs told the Daily Mail.

‘It was between me and Becks and I felt I could have affected it more. I was a little bit, “I am in the wrong position here”. But that’s no excuse. We knew we could make history or fail and with 10 minutes to go I just thought it was gone. Nightmare.

‘I always used to say that we would get one chance but in that one we were that bad there was just nothing. I was definitely drifting off a little bit in my mind. I knew I would have to face my mates and I wondered if I would ever be there again.’

United fans won’t be too bothered now as the tactic clearly worked well enough, even if the Red Devils didn’t actually play particularly well against Bayern that night.