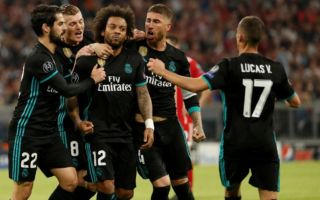 Manchester United have reportedly been given a major boost in their long-term pursuit of Real Madrid midfielder Toni Kroos.

The Germany international’s future has been the subject of some speculation recently after a below-par season for a player of his high standards.

Don Balon recently linked Kroos strongly with Manchester City, but it may be that he’ll be on his way to the red half of Manchester instead.

The Sun claim United could finally secure Kroos’ signature for around £50million as he looks for a way out of Madrid.

It is not entirely clear from the piece if the Red Devils are making the 29-year-old a priority target, but the report explains how close he came to joining the club in the past.

Toni Kroos to Manchester United transfer could finally be on, say the Sun

United could probably also still do with a midfielder of his calibre, with Kroos an ideal long-term replacement for club legend Michael Carrick.

The former England international retired at the end of last season and is now a coach at the club, while last summer’s signing Fred hasn’t been particularly convincing as his replacement so far.

Kroos may be a better, more proven and experienced option in the middle of the park, and the Sun suggest things are now falling into place for him to move to Manchester this summer.