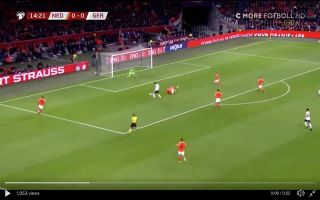 In the 15th minute of the match, Germany wing-back Nico Schulz charged down the left-wing and fired in a low cross into the box, the ball in seemed to bamboozle Ajax defender Matthijs de Ligt – the youngster tumbled down in the box, leaving Sane free to fire Germany into the lead.

This is a massive game for both countries as they both have hopes of returning to their former glories, tonight’s test is the first step of a long journey.

Tidy finish from Sané but who’s dropped the banana skin in the Holland box?

This is a massive moment for Sane, unfortunately the young wing wizard and his City teammate Ilkay Gundogan were the targets of racist chants during Germany’s last match.

Sane has shown that the disgusting racist behaviour won’t stop him from succeeding.