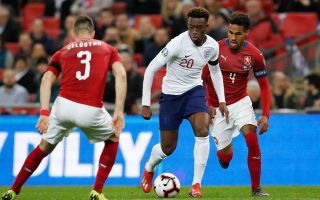 A number of Chelsea fans are clearly excited at the prospect of seeing Callum Hudson-Odoi get a start for England.

Sky Sports claim the 18-year-old is in line for his first start at senior international level for tonight’s game against Montenegro, despite his lack of regular action for Chelsea.

MORE: 8 young players and loanees Chelsea must show trust in next season if they’re hit with transfer ban

This certainly reflects quite badly on Blues boss Maurizio Sarri, who has worked with Hudson-Odoi for much longer but shown himself to be a great deal more reluctant than Three Lions manager Gareth Southgate to throw him into his team.

Hudson-Odoi has shone whenever he’s managed to get on the pitch for Chelsea, looking particularly impressive in the Europa League this season.

Still, we haven’t seen as much of him in bigger games in the Premier League, and it’s little surprise that many fans are now hitting out at Sarri as the player prepares for his first England start.

Could this persuade Sarri to change his ways? We’ll see, but for now he’s taking a lot of stick from this lot…

Even Southgate is starting CHO

Gareth Southgate has my respect. He's effectively using England to force Chelsea's hand a bit with Callum Hudson-Odoi. Sarri will take notice of his start tonight & he should get mre minutes as a result.

Shows how good Southgate is with youth that he's giving CHO a proper chance before Sarri when England's attack is already comfortably better than Chelsea's.#ENG #CFC