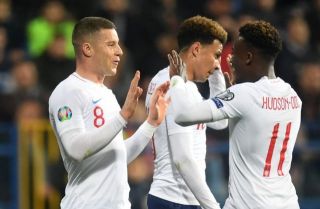 Chelsea fans will have been delighted with what they saw as England turned things around in their Euro 2020 qualifier against Montenegro on Monday night.

After Michael Keane had drawn them level after falling behind, the second goal was literally made in Chelsea as Callum Hudson-Odoi provided the assist as Ross Barkley turned the ball into the back of the net.

The pair have impressed during the international break, and they’ve certainly ended a barren run as far as the Blues are concerned when it comes to England.

As noted in the tweet below from OptaJoe, it has been 12 years since there was an all-Chelsea goal scored for the Three Lions, with a Blues player both assisting and scoring.

The last time it happened was with Shaun Wright-Phillips and Joe Cole, while Chelsea’s new wing wizard got in on the act this week as he marked his first competitive England start with an assist while Barkley continues to impress after proving to be crucial against Czech Republic last week.

Maurizio Sarri will be hoping to see more of the same from the pair when they report back for club duty, with Chelsea still battling for Champions League qualification as well as the Europa League.

Both have struggled this season to cement their place in the starting line-up though, but linking up well for England certainly won’t do their hopes any damage moving forward.

1 – Ross Barkley's goal is the first @England goal that is scored and assisted by @ChelseaFC players since September 2007 – Shaun Wright-Phillips scoring and Joe Cole assisting. Made. pic.twitter.com/8bvdeUegPT