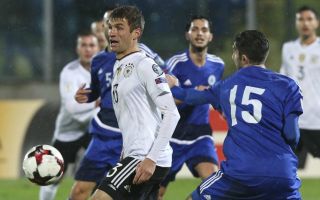 Bayern Munich star Thomas Muller has received a good old telling off after questioning the need for Germany to play against a national side like San Marino.

Back in 2016, Muller made rather insulting comments as he dubbed their team ‘amateurs’ – and, to be fair, Germany did win that game 8-0.

Still, to write off a footballing nation like that is certainly uncalled for, and they’ve hit back in some style in this open letter below from their head of communications Alan Gasperoni:

You’re right. The games like that on a Friday night, they’re nothing. To you. On the other hand, dear Thomas, you do not need to come to San Marino for almost nothing in a weekend in which, without the Bundesliga, you could have spent with your wife on the sofa of you luxury villa or, who knows, you could have taken part in some events organised by your sponsors to bank several thousand euros. I believe you, but allow me to give 10 good reasons for which I think the San Marino-Germany match was very useful and if only you could could think about it and let me know what you think. It served to show you that not even against the teams as poor as ours you can’t score a goal – and don’t say you weren’t pissed when Simoncini stopped you scoring…

With Love, your Alan.