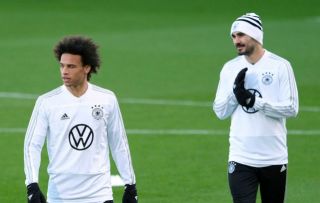 Manchester City pair Leroy Sane and Ilkay Gundogan were the targets of racist chanting from a section of Germany fans during their game against Serbia last week.

In what is becoming an increasingly worrying trend in a number of countries around the world, it seems there was a strong far-right presence at the game in Wolfsburg.

Sane and Gundogan seemed to be particularly targeted, with the latter being abused for his Turkish heritage, while the former was allegedly targeted with the term ‘negro’, according to the Daily Mail.

The report goes on to say that there were neo-Nazi and Hitler chants heard, and that a number of Germany players hit out at the behaviour of these fans.

It’s also claimed that three men have handed themselves into the police, so one hopes action can be taken to prevent this kind of thing rearing its ugly head again.

The German FA said, as quoted by the Mail: ‘Thanks to the support of a fan, the DFB was able to locate the ticket buyer for the seats where the spectators were sitting. The police have been turned on and are now investigating.’

Germany drew 1-1 with Serbia but responded with a fine performance to beat the Netherlands 3-2 last night.