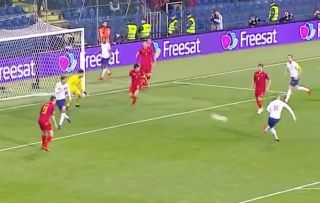 After falling behind, England came roaring back against Montenegro on Monday night with Ross Barkley at the heart of their comeback.

The Chelsea midfielder set up the first goal with a lovely set-piece for Michael Keane to head home, and then got himself on the scoresheet twice thereafter to put England 3-1 up.

SEE MORE: Hudson-Odoi and Barkley do something no Chelsea pair have done in last 12 years for England

After finishing off some great work from club teammate Callum Hudson-Odoi for his first of the night, Barkley was on hand to do the same after some persistent work from Raheem Sterling for his second, as seen in the video below.

The Man City forward did brilliantly to keep the chance alive and get the ball in the box eventually, and Barkley showed brilliant composure and a clinical edge to not snatch at a great opportunity and simply stroked it into the back of the net to give the goalkeeper no chance.

It was a well-taken goal from the Chelsea man, who will surely have forced Maurizio Sarri’s hand to feature more heavily in the coming weeks following his performances for England having been key against Czech Republic last week too.