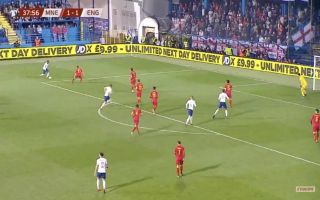 Callum Hudson-Odoi made mincemeat of his man down the left before having his shot at goal turned in by Ross Barkley for England on Monday night.

The 18-year-old earned his first Three Lions cap during the 5-0 win over the Czech Republic last Friday and he was granted a first start for his country on Monday against Montenegro as his reward.

Hudson-Odoi has fully justified Gareth Southgate’s decision in the first half, providing the assist for Ross Barkley to score from close range in the 38th minute.

The Chelsea teenager left two defenders for dead with a pair of dummies before shooting for the far post and Barkley made sure the ball found its way into the net with a neat touch.

Check out Barkley’s goal which has made the scoreline 2-1 in the Euro 2020 qualifier below, via Twitter.

A goal made in Cobham. Hudson-odoi shoots and Barkley directs home.

This Ross Barkley guy plays pretty well in white, like to see more of that in blue. pic.twitter.com/pGiTqFRIEg

Barkley’s goal, but that was all Hudson-Odoi ? #CFC #EURO2020 pic.twitter.com/efLH3Kz7x3