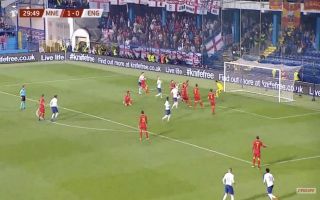 Michael Keane has scored an equaliser for England after Gareth Southgate’s men fell behind early on against Montenegro.

The Everton man was guilty of lackadaisical defending as Marko Vesovic wandered into the box to score for the home side after 17 minutes, giving them a shock early lead in Monday night’s Euro 2020 qualifier.

Keane managed to make amends on the half-hour mark though, heading the Three Lions level after meeting a beautifully swept in free kick from Chelsea star Ross Barkley.

Check out Keane’s goal which has made it 1-1 on the night below, via Twitter.

Get in there! Michael Keane! What a way to rectify his mistake for the goal. Needs to do that more for us! #MONENG pic.twitter.com/II0kbXDRVn

? @England have looked dangerous from crosses all game.

Michael Keane gets his first senior international goal to level for the visitors!#EURO2020 #MONENGpic.twitter.com/hws9g964ic