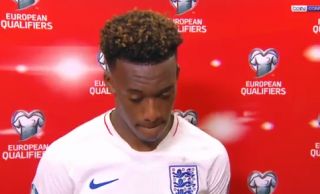 Callum Hudson-Odoi showed remarkable maturity to stay cool in response to the vile racist chanting he was subjected to on his first England start last night.

The Chelsea wonderkid has enjoyed a fine rise this season and put in an eye-catching display against Montenegro in a 5-1 victory last night.

Hudson-Odoi speaking so eloquently here while describing the racist abuse both he and Danny Rose suffered while playing tonight. Says Montenegro fans made monkey noises at them. Disgusting. pic.twitter.com/pU8xBHDj9s

Unfortunately, some idiot fans ruined the occasion for England, with a number of their players speaking out afterwards about being targeted with monkey chants.

Watch the video above as Hudson-Odoi, still only 18 and speaking after his first start for his country, speaks with real maturity and class to condemn the behaviour of those supporters.

Elsewhere, Raheem Sterling called for a stadium ban for Montenegro, with the Manchester City star doing well this season to call out racism wherever it comes from – be it the stands, or the media.