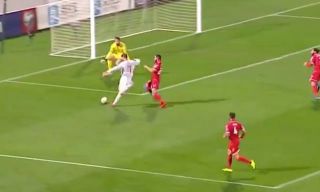 Spain were made to be patient against Malta in their Euro 2020 qualifier on Tuesday night, but Alvaro Morata eventually found a breakthrough.

The 26-year-old is currently on loan at Atletico Madrid after a bitterly frustrating spell at Chelsea, and it appears as though the switch has been a positive one.

Aside from scoring three goals and providing an assist in six La Liga outings so far this season, Morata was back amongst the goals for Spain in midweek, as seen in the video below.

Albeit question marks can certainly be raised over the defending and goalkeeping in this one, Morata shows a great first touch to get himself away from his marker and in on goal, and squeezes his effort in from a difficult angle to break the deadlock.

That will undoubtedly help to continue to build his confidence and belief, and so it remains to be seen if he can finally put his disappointment in England behind him and get back to the top-class striker that was seen at Real Madrid and Juventus previously.

? – Morata is amongst the goals!

The Spain striker gets in-behind and grabs the first goal of the night! ? pic.twitter.com/OSzXDtZE8s

What a Goal Morata, an early Puskas award contender surely just look at the way he brings the ball down and anticipates the keepers movement b4 slotung it was thim. Legend pic.twitter.com/wCslu0aOqn