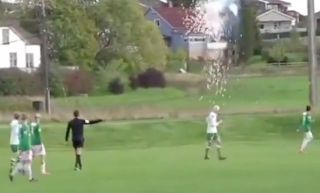 An innocuous clearance in this Norwegian third tier game became something much more serious after power lines were triggered to send sparks flying everywhere.

As seen in the video below, the ball is sent flying high in the air and off the pitch, only to hit a power line directly beside the field.

That then sparks a reaction with several mini power explosions going off with sparks flying everywhere as the players could do little but stand and watch until the matter resolved itself.

It’s unclear if the game continued thereafter or for how long it was delayed, but this probably doesn’t tick the right boxes health and safety wise seemingly being surrounded by power lines and at risk of repeating this scenario again many more times.

Only in the Norwegian third division! ???

A clearance from a defender tears down the power lines surrounding the pitch and creates fireworks ?? pic.twitter.com/ZAzGDMKCBj