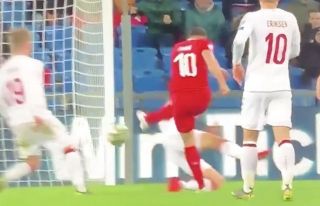 Granit Xhaka has scored some brilliant goals in his career to date, but the Arsenal man showed he has a right foot too for Switzerland on Tuesday night.

The midfield ace doubled his side’s lead against Denmark with a brilliant long-range effort, as seen in the video below, as they took charge of their Euro 2020 qualifier.

Having built a reputation for having a wonderful left foot which has seen him score some superb goals for club and country in recent years, he showed that he isn’t just a one-trick pony and can do the same with his right foot too.

Xhaka catches the ball sweetly and sends it flying into the back of the net to give the goalkeeper no chance, and after Remo Freuler had broken the deadlock in the first half, Bree Embolo added a third not long after to put them in complete control.

However, there was no denying the pick of the goals, as Xhaka will have enjoyed this one with Arsenal hoping to see more of the same when he returns from international duty.

Granit Xhaka scoring a banger for Switzerland with his weak foot. ? pic.twitter.com/gTdnj1tAaw