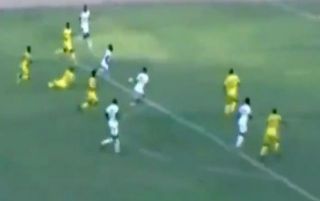 Sadio Mane made quite the impact for Senegal in their clash with Mali on Tuesday, scoring and assisting to secure a 2-1 win for his side.

The Liverpool ace was introduced in the 75th minute, and not only scored the equaliser, but provided the assist for the winning goal in injury time to complete a dramatic turnaround.

As seen in the video below though, his goal was undoubtedly the best of the bunch, as he showed his class with a mazy run into the area before producing a composed finish.

Mane is in brilliant form this season, scoring 20 goals in 38 games for Liverpool in their quest to win major honours.

Jurgen Klopp will be hoping that when he returns from the international break that the 26-year-old will be able to pick up from where he left off as Senegal are also undoubtedly benefiting from him taking his game to the next level.

From the ability to skip past challenges to producing an end product, Mane really is in a class of his own right now and this goal shows it.