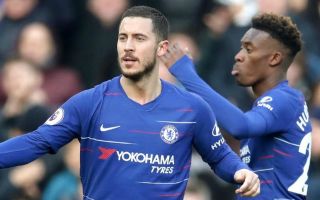 The 18-year-old has just made his senior England debut over this international break, and it looks like this gives the Blues an even tougher task in terms of keeping him at Stamford Bridge.

According to the Times, Hudson-Odoi’s desire to leave Chelsea has only increased since being brought into the England fold, and he’s set to be targeted again by Bayern Munich in the summer, as well as by Man Utd.

The Red Devils could certainly do with a player like Hudson-Odoi in their attack, with a similar attacking player in Jadon Sancho also being linked with the club by the Evening Standard and others.

United urgently need an upgrade on the struggling Alexis Sanchez, and could also be the perfect destination for Hudson-Odoi due to their history of giving chances to young players.

Chelsea surely now need to step up their efforts to keep this talented young winger by playing him more often, with the club facing embarrassment again after also losing top talents like Mohamed Salah, Kevin De Bruyne and Romelu Lukaku at a young age.

All three went on to shine for CFC’s Premier League rivals, and it would be a major blow if Hudson-Odoi ended up doing the same with a move to Old Trafford.