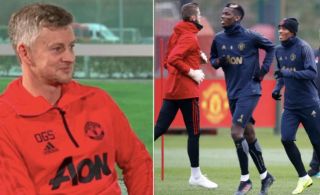 The Norwegian had been interim boss but was confirmed as United’s permanent replacement for Jose Mourinho this morning, and Evra just has some words of warning for anyone in the squad who thinks he’s just a nice guy.

Evra: “The United mentality as a big family is just back. We’re back in business. This is actually the best signing. A message to the young players, don’t let him down. He’s smiling every time, but he’s a killer. We have to be behind Ole and support him.” #mufc [Ig] pic.twitter.com/6c78BpyrJC

Evra played with Solskjaer during their playing days together at Old Trafford, and says he knows he looks smiley, but he’s not a nice guy when he loses.

The Frenchman described his old team-mate as a ‘killer’ and says the players must not let him down after today’s news.