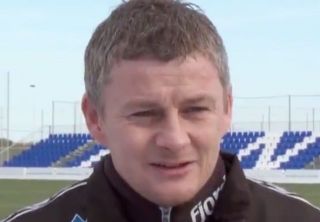 Speaking back in 2013, Ole Gunnar Solskjaer conceded that managing Man Utd was his “ultimate dream” after stepping into coaching.

Having taken charge at Molde to cut his teeth and embark on a new chapter in his career in 2011 after leading the Man Utd reserve team between 2008 and 2011, he has also had an unhappy spell at Cardiff City.

However, since being appointed interim boss in December, things have clicked for him at Old Trafford as he has led a resurgent United side to 14 wins in his 19 games in charge.

The Premier League giants confirmed that he is now their permanent boss after signing a three-year deal on Thursday, and as seen in the interview below, Solskjaer’s “ultimate dream” has now come true after insisting that was his target back in 2013.

Time will tell if he can now sustain that success over a longer period of time and win major trophies with Man Utd, as that will be the big test now to determine whether or not he can go down as a successful United boss.

We take a look at Solskjaer's to-do list as he is made permanent at Old Trafford…?