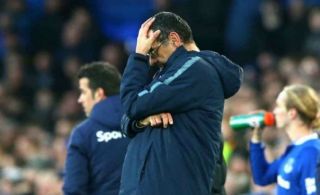 Chelsea’s attempts to convince starlet Callum Hudson-Odoi to stay are reportedly failing as it’s claimed that he is adamant about a summer exit.

The 18-year-old has impressed when given a chance this season, scoring four goals and providing two assists in eight appearances in the Europa League. Further, he’s bagged two assists and a goal two outings in the FA Cup, although hasn’t been so effective in the Premier League in six games.

Nevertheless, the talented youngster has shown his quality and earned his first caps for England over the international break, which suggests that he has a very bright future ahead for club and country.

However, speculation over his future at Chelsea is a concern for the club, as ESPN note that he remains adamant on leaving Stamford Bridge this summer.

It’s added that Bayern Munich have already tried and failed to prise him away with four bids being rejected, the last of which was for £35m which suggests that they’re not yet even close to testing Chelsea’s resolve.

The Blues will surely have no interest in selling this summer though, as their transfer ban prevents them from making any signings this summer and in January, which in turn means that they wouldn’t be able to bring in a capable replacement for Hudson-Odoi if he did leave.

With that in mind, he will surely have to accept that he must stay in west London for another year at least, although it gets more complicated for Chelsea as his contract expires next year.

In turn, if they can’t agree on a renewal, they may well be forced to sell in order to avoid losing him for nothing and make the smart financial move rather than take a risk.

Either way, they will be left bitterly disappointed in any circumstances in which Hudson-Odoi chooses to move elsewhere instead of fighting for a future at Stamford Bridge, but leaving themselves short is surely a scenario which they want to avoid at all costs to avoid further frustration next season.