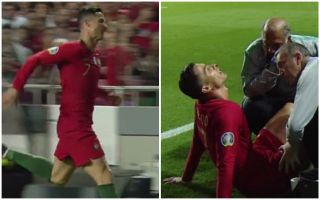 Juventus superstar Cristiano Ronaldo is reportedly at risk of missing the first leg of their Champions League quarter-final tie against Ajax next month.

The 34-year-old sustained an injury while on international duty with Portugal earlier this week, as he pulled up while sprinting after the ball in the Euro 2020 qualifier against Serbia.

That in turn immediately raised concerns over the length of his absence, with Juventus unsurprisingly keen to get him back to Turin to undergo further tests to discover the full extent of the problem.

As noted by Goal Italy, Ronaldo is now expected to miss the next three Serie A games against Empoli, Cagliari and AC Milan, but doubts have been raised over whether or not he’ll face Ajax in Amsterdam on April 10.

It’s suggested that Juventus will weigh up the risk of aggravating the problem and thus potentially seeing Ronaldo ruled out for a lengthier period of time at such a crucial stage of the campaign.

With that in mind, it seems like a sensible strategy to only bring him back when he is completely ready and the medical staff are as confident as they can be that he won’t suffer a setback if he returns to action.

Nevertheless, that will have to be weighed up with the need for their talisman to be present and leading their charge for major honours, having already bagged 24 goals and 12 assists in 36 outings so far this season.

It does help in Serie A at least though that they boast a 15-point lead over nearest rivals Napoli, and so they can arguably afford to rest Ronaldo and let him recover in the league, albeit they did lose to Genoa without him prior to the international break.