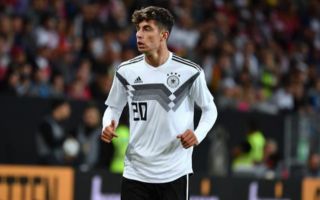 Bayer Leverkusen and Germany midfielder Kai Havertz has spoken out about rumours regarding his future, amid reports linking him with a move Arsenal.

Havertz has been setting the Bundesliga alight so far this term, scoring 10 and assisting four in 26 league outings for the German side, a very impressive record for a player of his age.

This form has seen the 19-year-old linked with a number of Europe’s top clubs, two of which are Arsenal and Bayern Munich, who the Mirror have noted are on red alert following recent words from the player.

Sport Bild have reported recently that Bayern are ready to make a €75M+ move for the player, with the Mirror’s report also noting that Arsenal have scouted the youngster ahead of the club rebuilding their squad this summer.

As per EuroSport, Havertz has been speaking about the rumours surrounding his future recently, stating that “I do not believe everything that’s in the paper, there’s a lot of talk in general, some things are true, some are not, I personally am good with the headlines because I know what I want.“

Havertz, who Leverkusen want at least £86M (€100M) for as per SportBild, would be a fine signing for either the Gunners or Bayern, especially if his performances for Bayer so far are anything to go off.

The wonder-kid has scored 21 and assisted 22 in 97 games for Bayer in all competitions, a record that seems too good for a player who’s just 19 years old.

It’ll be interesting to see what club Havertz ends up joining in the near future, and whether either Arsenal or Bayern are willing to fork out the money to sign the German star in the summer.