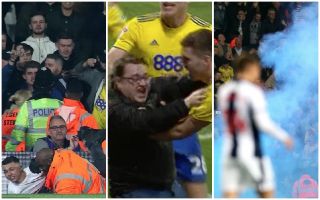 Birmingham City fell to a 3-2 defeat to West Bromwich Albion on Friday night at the Hawthorns, but the game didn’t pass without some concern.

Back on March 10, Blues fan Paul Mitchell stormed the pitch at St. Andrews during the derby against Aston Villa and attacked Jack Grealish.

That saw him given a 14-week prison sentence for assault, as noted by the Birmingham Mail, but it seems as though lessons haven’t been learned from that incident.

As seen in the images below, a Birmingham fan was able to get onto the pitch to celebrate their second goal against West Brom, while another can be seen being detained by stewards on the ground.

While this scenario is different as they were celebrating with their own players rather than attacking the opposing team, it still surely raises concerns over security at games.

In addition to that, the game was also stopped as stewards dealt with flares being thrown on the pitch from the travelling supporters, and so it remains to be seen whether or not further action is taken by the FA.

Having just received a nine-point deduction for breaking financial rules, the last thing Birmingham City need is more off-the-field drama, but clearly there are still concerns with their fans getting on the pitch regardless of whether or not it was with good spirited intentions.

BIRMINGHAM fans stormed the pitch in West Brom’s 3-2 win at the Hawthorns – just weeks after one was jailed for a shameful…https://t.co/LAUUGiBDok pic.twitter.com/RgGxoKkc1U