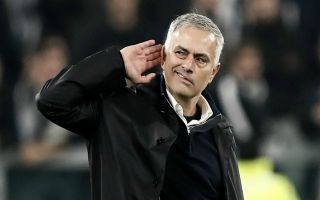 Jose Mourinho has been out of work since leaving Man Utd in December, but he could reportedly return to management at Bayern Munich next season.

The Portuguese tactician lost his job at Old Trafford after a tumultuous first half of the campaign, with the Red Devils struggling to even establish themselves in the top four race in the Premier League.

Coupled with frustration and disappointment over performances, it undoubtedly dealt a blow to Mourinho’s reputation, despite having delivered the League Cup and Europa League in his first season.

It seems as though he hasn’t been in a major rush to return to the dugout as he has been busy with punditry work since leaving Manchester, but reports claim that he could make a comeback ahead of next season.

As reported by The Sun, via Footmercato, it’s suggested that Mourinho is in pole position to land the Bayern job if the Bavarian giants opt to replace Niko Kovac, which arguably would be a sensible move given their overall struggles this season.

Bayern lead the way in the Bundesliga on goal difference over Borussia Dortmund but have struggled to assert themselves as the top team in Germany throughout the campaign.

Further, they crashed out of the Champions League earlier this month at the hands of Liverpool at the last-16 stage, and so much more is undoubtedly demanded from the coach and his players at what is a heavyweight of European football.

As noted by Goal.com, club president Uli Hoeness has revealed that the club will spend big this summer in order to build a younger squad with many stalwarts needing to be replaced.

That could entice Mourinho as he would be able to build his own squad and stamp his mark on it, while the challenge of winning a league title in a fifth European country as well as going for the Champions League for a third time, the pieces could really fall into place for this appointment to happen.