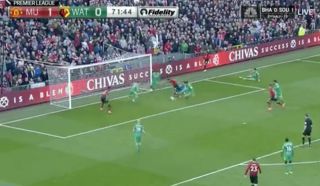 Anthony Martial was on hand to double Man United’s lead against Watford this afternoon with a scrappy goal, one that should wrap up all three points for the home side.

Having already been 1-0 up thanks to a goal from Marcus Rashford, Martial then doubled his side’s lead in the second half with a scrappy finish.

The goal came after some neat work down United’s right hand side saw a cross into the box reach Martial, whose initial shot was saved, before the Frenchmen then finally applying the finishing touch to double United’s lead.

It was a scrappy goal from United, but we’re sure they won’t be complaining!