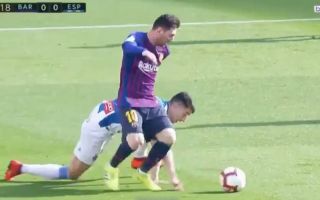 Lionel Messi completely embarrassed an Espanyol player this afternoon, putting him on his knees with some fine dribbling in Barcelona’s clash against their local rivals in the Catalan derby.

With the score at 0-0, Messi took the time out of his day to end the career of one of Espanyol’s players.

Dropping shoulders left and right, Messi eventually put the player on his knees, beating him with a fine dummy.

We’ve seen Messi do this hundreds of times throughout his career, so we’re not really too surprised to see him do it again here…