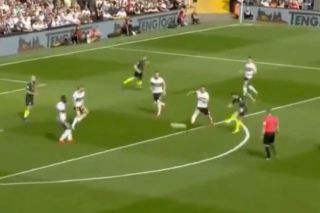 Man City wasted little time in breaking the deadlock at Fulham on Saturday as Bernardo Silva gave them the lead after just five minutes at Craven Cottage.

A stray pass from Timothy Fosu-Mensah put the hosts in all sorts of trouble early on, with Kevin de Bruyne initially pouncing on the ball to win back possession in a dangerous position.

After some nice build-up play between him and Sergio Aguero, the ball found its way over to Silva on the right side of the area, and the Portuguese international did the rest as he cut in onto his left foot and produced a great finish to give Pep Guardiola’s side the lead.

A win moves them back up into top spot in the Premier League table ahead of Liverpool’s clash with Tottenham on Sunday, although they do still have a game in hand as they hope to do their part and edge closer to defending their Premier League crown.

Video: Arsenal stars David Luiz and Cedric all smiles and laughing in reunion with Man City pals after Gunners defeat