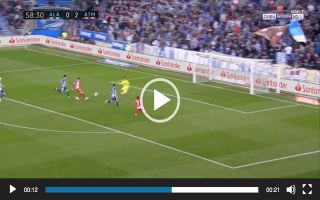 Out-of-favour Chelsea striker Alvaro Morata showed the Blues what they were missing this evening when he scored with a cheeky lob after a lung-busting solo run.

Morata extended Atletico’s lead over Alaves to three goals in the 59th minute of the clash, the Spaniard was sent through on goal by Thomas Lemar and showed fans that he does possess good composure after he charged towards goal before remaining cool, calm and collected enough to dink the ball over Alaves’ goalkeeper.

Morata has looked quite promising for Atletico since joining on-loan from the Blues in the January transfer window.

Morata comfortably scoring a 1v1 with a cheeky dink, you say?

Could Diego Simeone be the man to get Morata playing consistently well, both Antonio Conte and Maurizio Sarri failed to get the star firing at all cylinders during their time managing him at Chelsea.