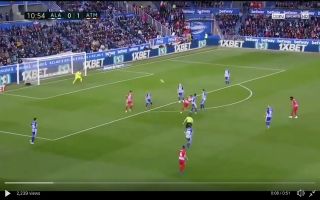 Atletico Madrid striker Diego Costa has scored a sensational goal for Diego Simeone’s side this evening, it is the ex-Chelsea star’s first goal since November.

Atletico enjoyed a flying start against Alaves this evening, Saul Niguez opened the scoring for Atleti just five minutes into the clash and just over five minutes later his teammate, Diego Costa – extended Atleti’s lead with a stunning strike.

Costa received the ball on the edge of the box after a pass from midfielder Koke, despite being pressured by two Alaves defenders the ex-Chelsea star turned towards goal and fired a cracking curling effort into the top corner.

The goalkeeper didn’t even try to stop the ball from hitting the back of the net.

Check out the superb strike below:

Diego Costa, that is spectacular ?

Costa has been plagued with injury troubles this season and this was the star’s first goal for Atleti since November.