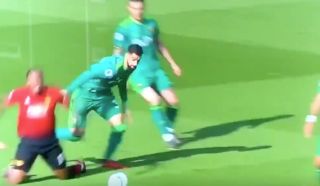 Anthony Martial was hammered for an awful dive during Manchester United’s clash against Watford at Old Trafford this afternoon.

United are currently 1-0 up against the Hornets thanks to a fine goal from forward Marcus Rashford, with the Red Devils looking to keep up their impressive form under new permanent manager Ole Gunnar Solskjaer.

Things look to be going good for United in their match against Javi Gracia’s side, as the club look to go joint-level on points with Tottenham, cranking up the pressure on their rivals in the process.

The first half wasn’t all good for United however, as key forward Anthony Martial had a moment to forget just before Rashford found the net midway through the first half.

With the ball in the box, Martial was barely touched by one of Watford’s players before falling to the ground as if he’d been shot.

This is something we definitely don’t want to see carrying on in football, and to be quite frank, it was really annoying to see Martial try and win a penalty with a dive as obvious as this.

You can catch the incident below, as well as what a selection of fans had to say on the incident.

In all honesty, we agree with them…

Disgusting dive by martial there, but no one cares cuz he is not the best forward in the league #justiceforsalah

Well that was a shit dive from Martial.