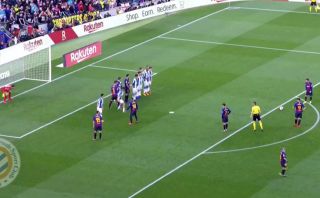 Lionel Messi scored a very cheeky free-kick to give Barcelona a 1-0 lead against Espanyol in La Liga this afternoon.

Having been held by their local rivals up until the 70th minute, Barca finally broke the deadlock midway through the second half via a superb Messi free kick.

The goal came after a foul on Messi was given on the edge of the box, with the Argentine then chipping the free-kick into the net thanks to some help from an Espanyol defender.

So cheeky to try something like that, especially against your local rivals!