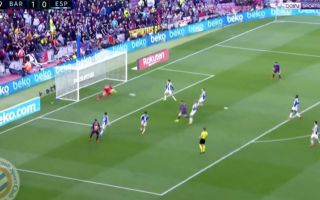 Lionel Messi (who else) was on hand to wrap up the win for Barcelona this afternoon in their clash against local rivals Espanyol in La Liga.

Having already given Barca a 1-0 lead from a free-kick, Messi scored both his and the Blaugrana’s second of the game to wrap up the win for the home side.

The goal came after a fine counter-attack from Barca ended up with Malcom squaring the ball to Messi, who finished emphatically to score his 31st league goal of the season.

It was a brilliant move all-round from Barcelona, wrapped up by none-other than Mr Lionel Messi.

He is just too good sometimes.