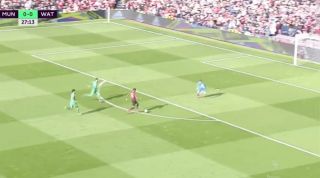 Man United took the lead against Watford this afternoon, as Marcus Rashford opened the scoring by finishing off a brilliant counter attack midway through the first half.

United had been held by Watford up until the 26th minute, however thanks to Rashford, the home side ended up breaking the deadlock with a deadly goal on the counter.

Make sure to follow us on Instagram for live video highlights of every Utd game uploaded to our stories https://t.co/uHFBSQ2Ct1

The goal came after Luke Shaw won the ball back for United before playing superb ball to Rashford, who kept his cool before chipping the ball home.

What a counter-attacking goal from United.

Ole’s certainly at the wheel today!