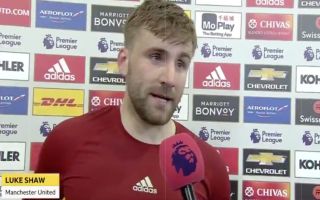 Luke Shaw admitted that Man United were “awful” in the second half against Watford this afternoon, this despite his side winning the match 2-1.

United managed to secure victory over the Hornets thanks to goals from Marcus Rashford and Anthony Martial, one that means the club are now joint-third in the Premier League table.

Despite the result, some United players clearly weren’t very impressed with their own side’s performance, one of which was defender Luke Shaw.

Shaw spoke to BBC after his side’s win at Old Trafford today, stating that “I’ll tell the truth, and the boys will speak the truth, we were awful in the second half, and I think we were lucky with the result today.”

"We were awful in the second half".

Luke Shaw says Man Utd made it hard for themselves.

It’s fair to say that United maybe weren’t at their absolute best today, however to brand their second half performance as “awful” is a bit harsh to say the least.