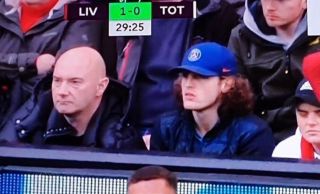 It briefly looked like Paris Saint-Germain midfielder Adrien Rabiot came to watch the Liverpool vs Tottenham game today, but it’s just a guy who looks a lot like him.

Some fans have flagged up this image below, with a young man with long curly hair watching Liverpool against Spurs from the stands.

MORE: (Photo) Roberto Firmino appears to dab while scoring for Liverpool and these fans love it

Liverpool have been linked as one of the clubs pursuing the France international (by the Daily Star earlier this season) as he nears the end of his contract at the Parc des Princes.

So it’s understandable that a few got a bit carried away, but it looks like others have found the Liverpool fan in question, who goes by the name of Connor Deane.

WOW!! Look who was watching today’s game at Anfield a few moments ago.

Spurs & Liverpool have both shown interest in him recently – will he be going to one of the two soon? ? pic.twitter.com/FWDLCwFtIi

Fuck it I am Rabiiot @LFC pick me up from mine in the morning fellas I'll be fit for Southampton away Friday ?