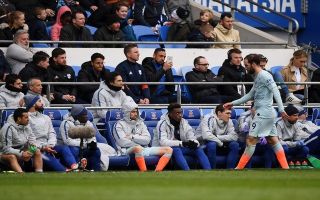 Some Manchester United fans took to social media to call for the signing of one of Chelsea’s star players this afternoon, the Blues controversially beat Cardiff 2-1.

The football world was left shocked by Maurizio Sarri’s decision to name wonderkid Callum Hudson-Odoi on the bench ahead of Chelsea’s clash against Cardiff, the ace dazzled for England during the international break and it looked as though he’d finally get his first start in the Premier League.

To make matters worse, the exciting winger wasn’t even called upon by Sarri when the Blues fell a goal behind and he was understandably very frustrated whilst sitting on the bench. 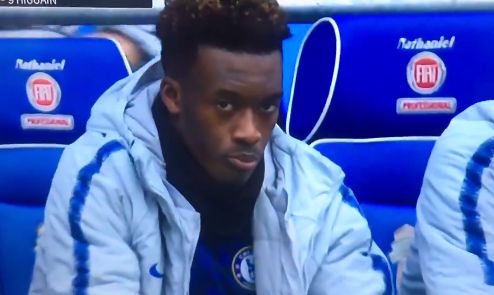 Hudson-Odoi frustrated after being benched by Sarri.

Some Manchester United fans were completely baffled with Sarri’s decision to bench the star and this led to them calling for the young sensation’s signing in the summer:

That RW position at Old Trafford is all yours if you want it @Calteck10.

Hudson-Odoi to United seems perfect to me. We need a RW, he is young and will get opportunities. #MUFF

United should be looking to sign Hudson-Odoi this summer

Hudson Odoi is criminally underused at Chelsea. Hope it continues, cos i'd love him at United.

Hudson-Odoi certainly has what it takes to flourish for the Red Devils under Ole Gunnar Solskjaer. The United legend has managed to get United’s attacking players firing at all cylinders.

The likes of Paul Pogba and Marcus Rashford have been lethal under the baby-faced assassin, Solskjaer has helped turn things around for the pair who struggled at times under Jose Mourinho.

Chelsea were already made to look like a laughing stock during the international break when Hudson-Odoi managed to win his first senior cap for Gareth Southgate’s Three Lions, despite never starting a Premier League game.

You’d think with the confidence that Hudson-Odoi has after returning from his first trip away with the Three Lions, that he’d be a guaranteed starter for the Blues – it seemed like everyone thought that apart from Maurizio Sarri.