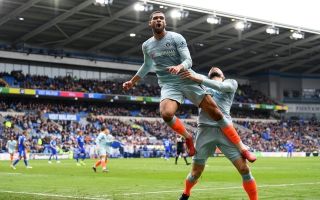 After Chelsea’s controversial late comeback against Cardiff, the Blues have managed to secure a place in the league’s history books, by achieving this incredible feat.

Chelsea were helped on their way to a late comeback by a controversial decision in the 84th minute, Cesar Azpilicueta’s goal from an offside position was allowed to stand and this clearly gave Chelsea the fire to go and push for a winner in the final stages of the match. Take a look at the controversial goal here.

Midfielder Ruben Loftus-Cheek was the hero for the Blues, the substitute scored a lovely header in the 90th minute of the clash to seal a victory for the Blues. Take a look at it here.

With Chelsea securing a late victory, they became just the third Premier League in history to win four consecutive matches against the same opposition after conceding first:

4 – @ChelseaFC have won four consecutive Premier League games against Cardiff despite conceding first each time, only the third time this has happened in the competition (also Newcastle against Leeds and Arsenal against West Ham). Spirit. #CARCHE pic.twitter.com/56P2FuIZLd

Earlier this season the Blues thumped four past Cardiff after conceding early on. Chelsea are clearly slow starters against the Bluebirds as they also came back to beat them twice during the 2013/14 Premier League campaign.

A dive into the history books by myself has also revealed that Chelsea’s home and away scoreline’s (4-1 and 2-1) against the Bluebirds are exactly the same as the ones in the 2013/14 season. Uncanny.

The race for a spot in the top four is still extremely tight, the sixth placed Blues are only one point behind Tottenham and Manchester United in third and fourth.

Despite this, it looks as though Chelsea will be one of the two teams that fail to finish in the Champions League places, because of their disastrous performances recently. The players need to push things up a gear if they are to have any hope of securing a top four finish.